2 new huntable animals have been released, the wolf and the deer. 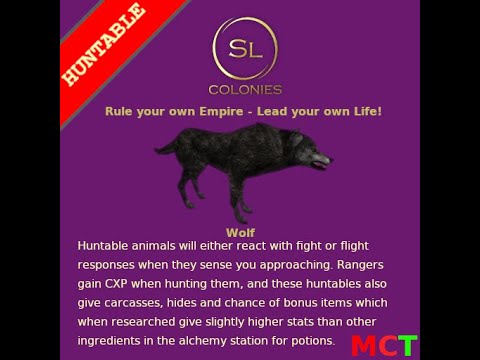 Huntables are animals that will either fight or flight when sensing you in range. If you manage to kill them before they kill you or escape, you will obtain an animal carcass and the possibility of an animal hide or scrap hide used to make leather. The carcasses are brought to a butcher for portioning before being made into various cuts, minces and other meats for use in cooking.

These animals also all have a chance of giving you special ingredients which give higher bonuses when researched in the alchemy station, than any other ingredients in the system.

You can set respawn points on your animals so that they will spawn in different parts of your land or perhaps spawn into groups in specific areas where they are more likely to congregate.

You will need a weapon to hunt animals, such as a sword or a bow. The Ranger profession will earn CXP with every kill of these animals.

The huntables look really cool. The wolves will fit well on my land.

Any chance to make them actually fall over sideways instead of going into a hand stand? Lol that part looks a bit strange.

I think it has something to do with how the physics works out when it gets flung after a kill. We can look into it though.

Ah yea if its a physics thing maybe its an SL thing. I was thinking it might just be an issue of giving it a death position and rotating it around.

Yeah it’s a physics issue since we turn animals into physics.

We might need to add some gravity to the animals to stop them sometimes floating up or rezzing through floors on layered sims.

There will be updates as we figure them out and play with them.

So after I activated the wolf it attacked me as expected. I was trying to get away from it and teleported about 30 meters away then it was gone.

Does it de spawn when it loses a target rather than go back to its original position?

Also, on the various spawn points. Can it respawn on a random interval just standing around and not just when it was killed?

They uave a max range from their spawn point. Once out of that range they will vanish.

They spawn at a new location once killed or out of range. This stops the scripts having to send out communications.

They don’t travel about or wander.

We could get them to respawn at a random interval if it’s something people want. The issue is if someone doesn’t set spawn points, its just a waste of sim memory for nothing.

We try to build our products with least lag as possible for the region servers and our databases long term.

Hmm that doesn’t seem to be what happened.

It chased me to a certain spot and began to follow me back to the original location. So that shouldn’t have been outside of its max range.

Its when I teleported away from it, which was actually right next to its spawn that it disappeared.

Thats why I assume it is a distance from its target.

No problem either way. Just trying to understand how it works.

If anyone was having trouble finding huntables in store, I’ve created a new vendor for them.

Seems the old vendor for some reason kept on displaying no product.

hi, i have tested the 2 animals. have both rezzt set the range and set the respawn points and set to ON. the deer stops and does nothing when i come into his range. the wolf at least follows me, slowly but ok he does something. my question, can i take the slaughter knife to hunt and kill the animals or do i need a real weapon? if so then i have a problem, i have a slaughter knife in my inventory but can not put it on and use it? when the animals are killed do they reappear? thanks

both await there dead^^

Try lifting the rezzer for the deer off the ground a little more so it doesnt get stuck in the ground. We will release an update soon that spawns them a little higher from the rezzer and then uses gravity to come back down.

The slaughrer knife causes no damage to huntables. It is a special knife with a special effect that works on domesticated animals who have a weakness set to the slaughter knife.

You will need weapons to attack these huntables. Same as monsters.

Huntables are animals that will either fight or flight when sensing you in range. If you manage to kill them before they kill you or escape, you will obtain an animal carcass and the possibility of an animal hide or scrap hide used to make leather....

The deer give 2cxp to rangers and respawn after 30 minutes.

Huntables are animals that will either fight or flight when sensing you in range. If you manage to kill them before they kill you or escape, you will obtain an animal carcass and the possibility of an animal hide or scrap hide used to make leather....

The wolf give 10cxp to rangers and respawn after 45 minutes.

The rezzers just go transparent, so if you turn view transparent on in your viewer you will be able to see them, turn them off, set new ranges and spawn points and move them about as you wish.

next problem. if i take the active wolf into the inventory then it is copy and i can rez the wolf out countless times?

No, the copyable item inside the rezzer needs to be rezzed by the rezzer to establish communication. If you take it out of the rezzers inventory and rez it in the world, it will not have formed communication and will not be killable or do anything.

Unless you’ve found another method?

If you rez it, and it’s not chasing you or running away, it’s useless and does not take any damage as it’s not communicated with the rezzer.

right both are inworld but can not take damage as far as i can tell. however if you collide with them so they dish out damage

my wife has lost 60% just by bumping ^^
another question, why does the wolf try to respawn even though he was not killed?

If an animal has rezzed out by anyone coming near it, and chased someone or ran away from someone and lost range with the player it has targetted, it will initiate a respawn of it after its respawn timer.

You can make a rezzer disappear 3 ways:

there is still art 4:
take the wolf in your inventory then you take no damage and he respawns.

Yeah but that’s you as the owner doing that. A regular visitor to your sim cannot pick up your items.

There’s no benefit to you picking up the animal, correct?

no, only that the wolf can no longer cause damage to me