As some of you may know (if you read my Land Promotion post) I have set up several competitive equestrian courses on my sim.

I am thinking it would be fun to host SL Colony equestrian competition events for those of you who own ridable horses by Teegle or Water Horse.

The competition could offer Lindens, SLC Coins, and other SLC items and resources. Maybe even the Devs can get involved by sponsoring prizes.

So check out my sim map and drop by to check things out and let me know if this sounds like something you would be interested to participate in. 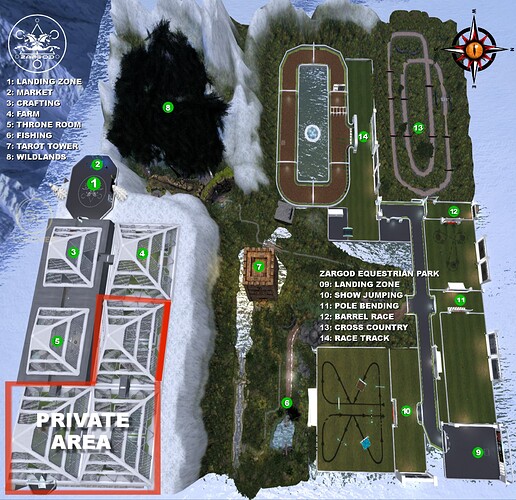 3 Days and 18 views later, only my vote added! So much for community/Dev interest: I guess I will put my gold ore back into the vault…

Have you tried promoting it in the group chat? I’m open to you posting urls to your own lands and to the forum posts etc.

I didn’t respond as a dev originally because I wanted to see community interest.

The group chat is barely used on the best of days and I have yet to see any activity/event notice posted. I wanted to first see if colony members would be receptive to such an event prior to promoting on group chat.

Me thinks each colony is still cocooning as there really isn’t any system infrastructure such as archery, jousting, or combat to encourage competitions and tournaments.

And to have a demon that has openly admitted to sacrificing humans attempt to encourage inter colony participation, well one can understand why they choose to remain safely tucked in their comfort zones…

The group chat is barely used on the best of days and I have yet to see any activity/event notice posted.

Perhaps we can have a way to allow sim owners to create event notices on the SLC Group. Either by permissions gained by owning a region server or a page up within the meter website that allows for the scheduling of a post moderated and approved by admins before it appears in our group notices?