Cooking stations and storage chests (both personal and community) are throwing error messages, or are failing to move past the first menu. The owner sees the script error dialog. The user sees nothing, but has no functionality of the item. 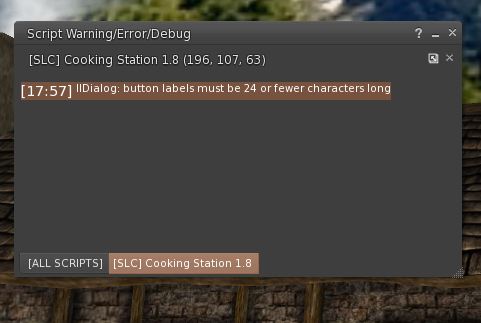 Working on it. It’s one of the rezzable foods we picked that when we changed it’s name to become rezzable, has made it go past the character limit.

The error should for now be gone as I troubleshoot.

Edit: Shouldn’t get anymore errors. I had to rename one of the winning recipes just a tad to make it fit. Now that I’ve done that, I can announce the winners.

Vu can break anything! Even when he doesn’t directly do anything.

This topic was automatically closed after 18 hours. New replies are no longer allowed.